Le Mazet Plage camping d’Ardèche Sud, wanted to make life easier for lovers of caving and prehistory. That’s why we’ve listed the most beautiful caves in the Ardèche. Discover a fascinating geological universe, between limestone cliffs, caves with underground river, cave paintings and intriguing rock formations. During your holiday in the Ardèche, a visit to the caves is without doubt one of the best activities to do in the Ardèche.

Arm yourself with your headlamp, softshell jacket and hiking bag: you are about to take a real trip back in time and into the bowels of the earth !

Located in Pont d’Arc less than 20km from the campsite, this cave in the Southern Ardèche was discovered in 1994 and listed as a World Heritage Site in 2014. It is 36,000 years old, perfectly preserved and full of artistic drawings of animals, some of which are unique in Paleolithic cave art. This exceptional masterpiece, which must be carefully preserved, is not open to the public. But there is a solution..

The original Chauvet cave is not open to visitors, so an exact replica has been made: the Chauvet 2 cave. It faithfully recreates the cave paintings of animals and engravings made in prehistoric times. Among the stalactites and stalagmites, discover a prehistoric world that is truer than life, with 10 observation posts, 27 panels and a huge 12-metre fresco representing lions.

This site is a meticulous, life-size reproduction of the Vallon Pont d’Arc cave, formerly known as the Pont d’Arc cave. You will discover paintings, engravings, bones, in an atmosphere where all the sensations (freshness, humidity, darkness…) are also reproduced. Guided tours are available.

Discovered in 1836, 57 galleries have been counted in this cave located on the Route des Gorges, in Bidon. For 1 hour, follow the guide’s explanations on a 600-metre exploration of the cave. Discover pools, cathedrals and crystal formations under magical lighting and soak up the special atmosphere of the place.

Consisting in reality of two caves (Lescure and Madeleine), this cavity nestles in the Gorges de l’Ardèche, between Vallon-Pont-d’Arc and Saint-Martin-d’Ardèche. Featuring large halls decorated with stalactites in astonishing plays of colours, the visit takes place on different levels, up to 65 metres underground, over 500 metres long.

Caves of the Balmes de Montbrun

These caves, in Saint-Ginéis-en-Coiron, date back to medieval times. It is a troglodytic complex situated on a rocky promontory overlooking an ancient volcanic cirque. It gathers about thirty cave-habitats, constituted in village. Visit these Ardechean caves dug into the cliff at different heights. Remnants of development remain in the caves.

In the commune of Soyons, the grotto of Néron was classified as a historical monument in 1965. Dating from the Paleolithic period, access is through a wood, after climbing many steps. The tour is guided and includes a visit to the Fox Cave. You will learn how the Neanderthal man lived there.

After descending 59 metres, you will arrive in the “Tomb Room” of this cave located in Saint-Remèze. You will discover huge stalagmites and cave paintings. A “sound and light” staging gives enchantment to the place. Two other rooms are to be visited, including one with impressive shiny walls of calcite crystals.

In Courry, near the Cévennes, you will visit a cave in constant formation whose origins date back to the Jurassic period, i.e. about 140 million years ago. The guided tour lasts 1 hour. You will be able to observe classic and more unusual concretions reflected in the water of the cave. The ascent is made by small train.

Cave of the Forestière

This crystallized Ardeche cave in Orgnac-l’Aven, at the Col de la Forestière, has 55 steps to go down to get there. The visit is unguided. Equipped with a front lighting provided at the entrance, walk through a classified underground cavity to discover its splendours for yourself, a unique experience to be had.

Want to know more about the most beautiful caves in Ardeche? : https://en.ardeche-guide.com/sites-to-visit/caves 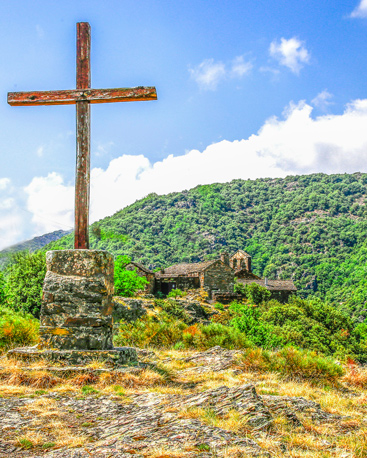 Top 10 hikes in the Ardèche 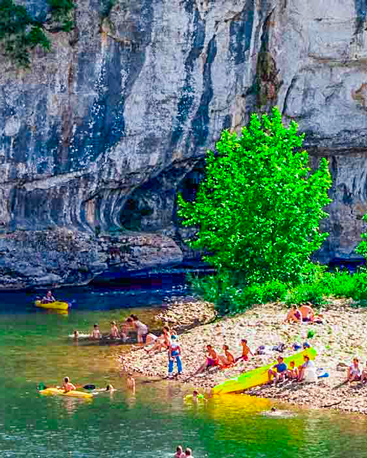 Canoeing in the Ardèche
by the way