Campsite Ardèche » The articles » The Train of the Ardèche

The Train of the Ardèche

History of the trains and the line

Linking Tournon-sur-Rhône to Lamastre, the railway line was built between 1886 and 1890 and inaugurated in 1891. The sinuosity of the route, crossing the valley of the Doux river, led to the construction of multiple structures to fix the railway to the rock cliffs. The locomotives running on it carry freight and passengers. Steam locomotives from Switzerland were custom-built in 1903 and 1932 for the line. With 400 horsepower, they can pull a train with over 600 seats. Made of varnished wood, the oldest car dating from 1891 comes from Brittany and carries passengers. Symbols of the modernisation of passenger transport in the region, the “Billard” railcars entered service in 1938. One of them was listed as a historical monument in 1992. From 1969, the railway line was dedicated to passenger transport to help them discover a panorama accessible only by train. An open car train is added in 2013.

Six routes are run by the Train of the Ardèche :

Other train tours are unmissable depending on the events of the year. Wine tasting on a steam locomotive, Western train in July-August with a horse show at the end, special Heritage Day tour, Sommelier train in October to discover the great wines of the region, ghost train at Halloween, Christmas train…

Depending on the route chosen :

Free transport of bicycles, luggage and pets on a leash (the latter are not allowed in 1rst class). 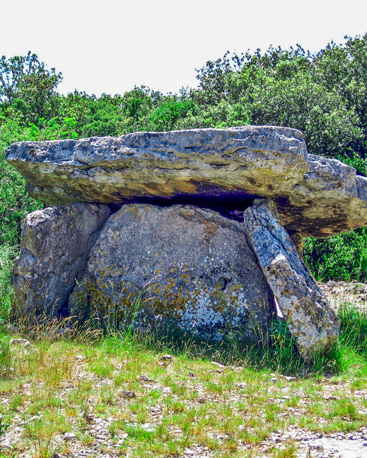 Dolmens in the Ardèche

Top 10 hikes in the Ardèche
by the way